Duncan carries away three trophies at the opening of the KCC Exhibition 2011.

November 2011.  Although Duncan has consciously scaled-back his camera club activities of late, especially competition entries, he remains mindful of how his memberships have helped him to develop his photography and still supports his main club Malden, and second club Kingston.  The latter opened their impressive annual Exhibition (held at Kingston Museum) on Friday 4 November 2011 and Duncan performed Official Photographer duties for the evening.  He had to hand over his cameras to others though when he himself was presented with three trophies.  These were for “Best Print of the Exhibition” (the second consecutive year that Duncan has won this, “Winner, Advanced Print League Competition 2011″ (the third consecutive year he has won this) and “Winner, Best Panel of Six Images”. 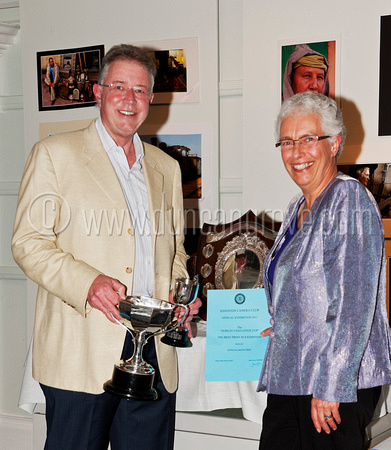 Duncan Grove FRPS being presented with his three trophies by Rosemary Wilman Hon FRPS, until recently President of The Royal Photographic Society.