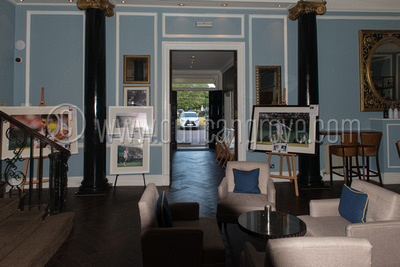 After an extensive refurbishment, and following the success of last year’s exhibition, Hotel du Vin Wimbledon felt that Duncan’s exhibition would be the perfect way to get the hotel residents in the mood for the Championships. General Manager Phil Lewis also saw this as a great opportunity to showcase the newly renovated property to local residents and visitors alike.”

Duncan’s extensive research over several years (!) confirms that there really is no better way locally to spend a fine Summer’s evening during July than a drink on Cannizaro’s terrace, a meal in its Orangery, a tour of a tennis photo exhibition and a chance to spot some tennis celebrities!

He is very grateful for the Hotel’s continued support and has enjoyed being allowed “behind the scenes” of the hotel for a few days.  This has made it obvious to him that the new regime recognises that managing a hotel by prioritising the interests of its guests is the best way to create a successful hotel.  The Cannizaro has the basic fabric to be an exceptional hotel and the new management is certainly exploiting this and raising the bar in terms of delivering overall standards of excellence.

Prints form the exhibition are available to purchase for private hanging only (no commercial use) and net proceeds will be donated o an AELTC nominated charity.  A copy of the exhibition catalogue can be downloaded here.