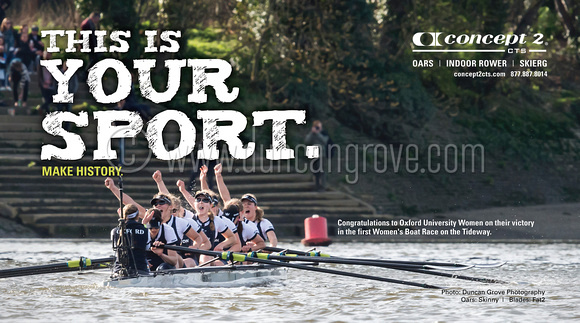 Concept2’s US & UK ad based on one of Duncan’s images.

Concept 2 manufacture oars and blades that are used by the Oxford University Boat Race crews.  They also manufacture rowing machines.  (Last month Duncan was staggered to find that his German hotel suite had a Concept 2 rowing machine in the living room!  He walked around it warily since he is allergic to such equipment!)

Concept 2 have chosen to base their US and UK ad campaigns on one of Duncan’s images of the OUWBC Blue crew celebrating their historic win, only seconds after having passed the finishing line.  Duncan was shooting from the Press Launch that was still some distance away, and was only able to capture this shot since he was using a very high resolution body with an extremely long lens!  The original image can be seen here.